On Thursday, September 16th, Louisiana Motor Coach Vice President and General Manager, Louis Sanders, created a surprise for his family with the help of the Cystic Fibrosis Foundation Baton Rouge Chapter in a Memoriam for the family’s late son, Bobby Celeste, who fell ill from the debilitating disease.

At the event, Louis spoke to Bobby’s memory, the struggles of parents of those with CF, and the need to expedite finding a cure – solidifying his commitment with a pact to donate $1,000 on the 16th of each month from that day forward. He added that vehicles in their nationwide fleet will be fitted with a QR code linking directly to a landing page for additional ongoing donations.

On hand to accept the donation was Erin Achberger, Executive Director of the Louisiana-Mississippi Chapter of the Cystic Fibrosis Foundation, as well as CFF community members Dr. Brandon Hider and his daughter Bree, who also is a fighter. Von Mack, Louisiana Motor Coach’s marketing agency of record, facilitated event planning, production, and social media assets.

“In our world today, we don’t always slow down long enough to take in ‘life’ as such a gift as it is,” said Louis Sanders. “We will continue donating until CF stands for Cure Found.”

For more information on the Cystic Fibrosis Foundation, and details on how YOU can join them in finding a cure, visit https://www.cff.org/Get-Involved/ 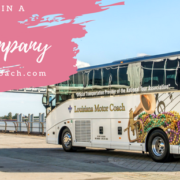 Charter Bus Companies: What to Look for…

Charter Bus Companies: What to Look for…